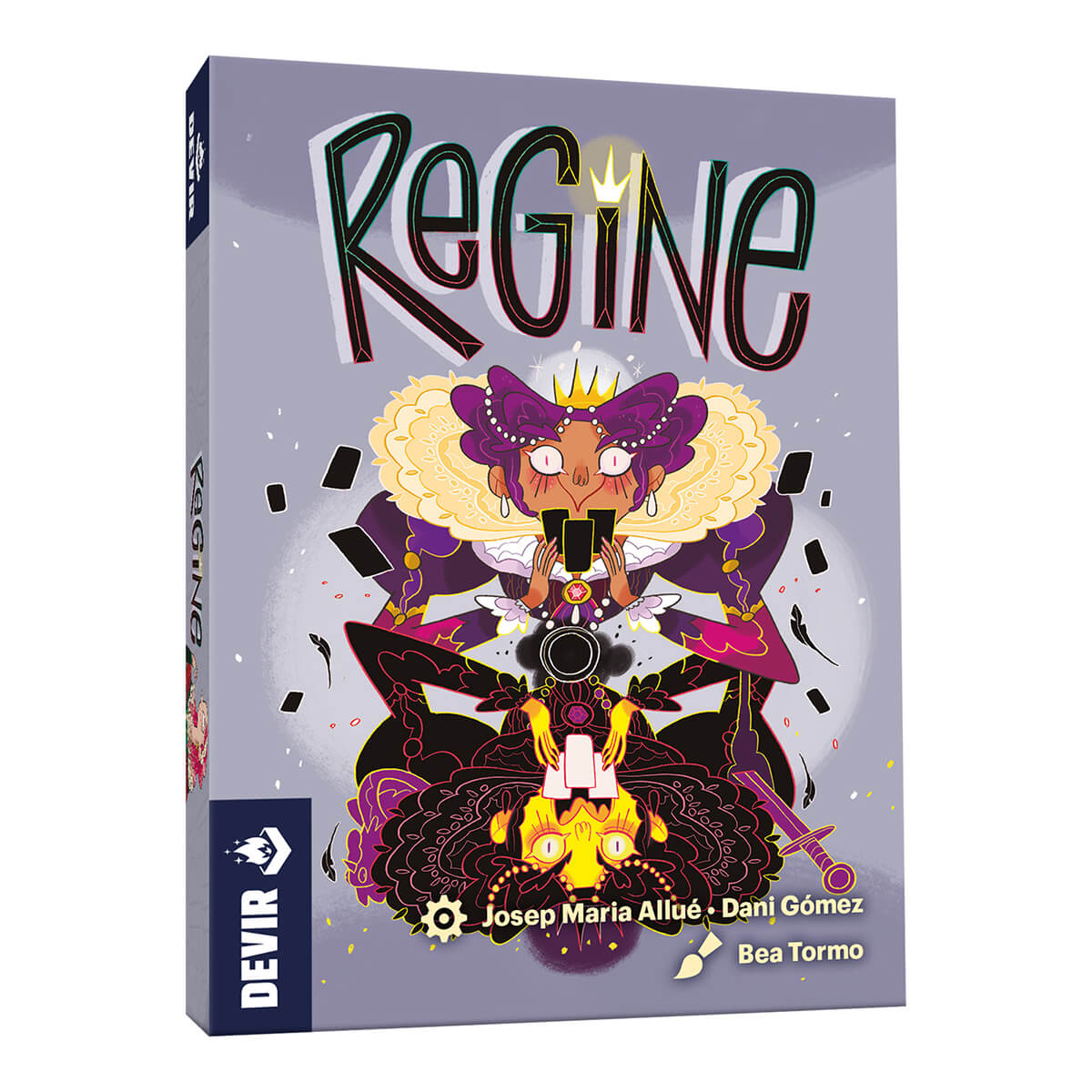 Regine is a card game of betting and bluffing, designed by Dani Gómez and Josep M Allué, the author of games like The Color Monster, Castellers!, and Dragons & Chickens. It is illustrated by Bea Tormo. It’s for 2 to 4 players ages 10 and up and games last around 30 minutes. Regine brings us back to the European courts of the end of the 16th century and the goal is to be the first player to reach 31 points.

Watch your backs…because the daggers are flying! In Regine the interaction among players is constant and the majority of the effects of the cards affect the hands of your rivals. As the game progresses, each player tries to get the best combinations to score points but they don’t always have control over their hands.

The intuitive card design makes it quick and easy to learn how they function. And if you know how to play Mus, some of the rules will seem familiar. Rounds are structured in 3 phases: hand construction in which players try to get the most favorable card combinations, a betting phase where they bid on the best hands, and point resolution. To start, put the 4 scoring cards in the middle of the table alongside the betting chits. Shuffle the remaining 40 cards, deal 4 face down to each player, and put the rest in the middle of the table. You’re now ready to start the first phase!

In a turn, a player can do 1 of 4 actions. The first is change one of the cards in their hand for the top card of the deck. The second is to announce “no changes,” which blocks the rest of the players from changing cards from the deck. The third is play a card either face down or face up on the table. If a card is placed face up, it may trigger an action. The jester, for example, negates a “no changes” declaration previously made by another player. The peasant forces a player to play a card face up on the table and use its effect. The assassin eliminates a card that has been played on the table, the courtesan forces a player to reveal a card that has been played face down, the herald lets one look at the top card of the deck and the knight forces one to change a card from their hand. Finally, each player can also pass and when all players pass, all remaining cards are placed face down and the betting phase begins.

Be sharp and observant, because it’s now time to bluff! Taking turns, the players will bet on the scoring cards. They’ll bet on the highest number of queens and jesters, on pairs and trios of cards, and for the total value of their cards. It’s not always necessary to have the best hand in order to score points! You can always trick the other players into thinking you have better hand than you really do. In the last phase, the resolution, all cards are revealed and points are awarded. Rounds continue like this until a player reaches 31 points.

A good memory and a big dose of shrewdness will be your best allies in Regine, ensuring quick games and hours of fun. Families and friends, young and old will enjoy this game (try playing with your grandparents or card playing in-laws and they’ll quickly get the knack). So move with caution among the knights and courtesans and don’t get caught with the wrong cards!