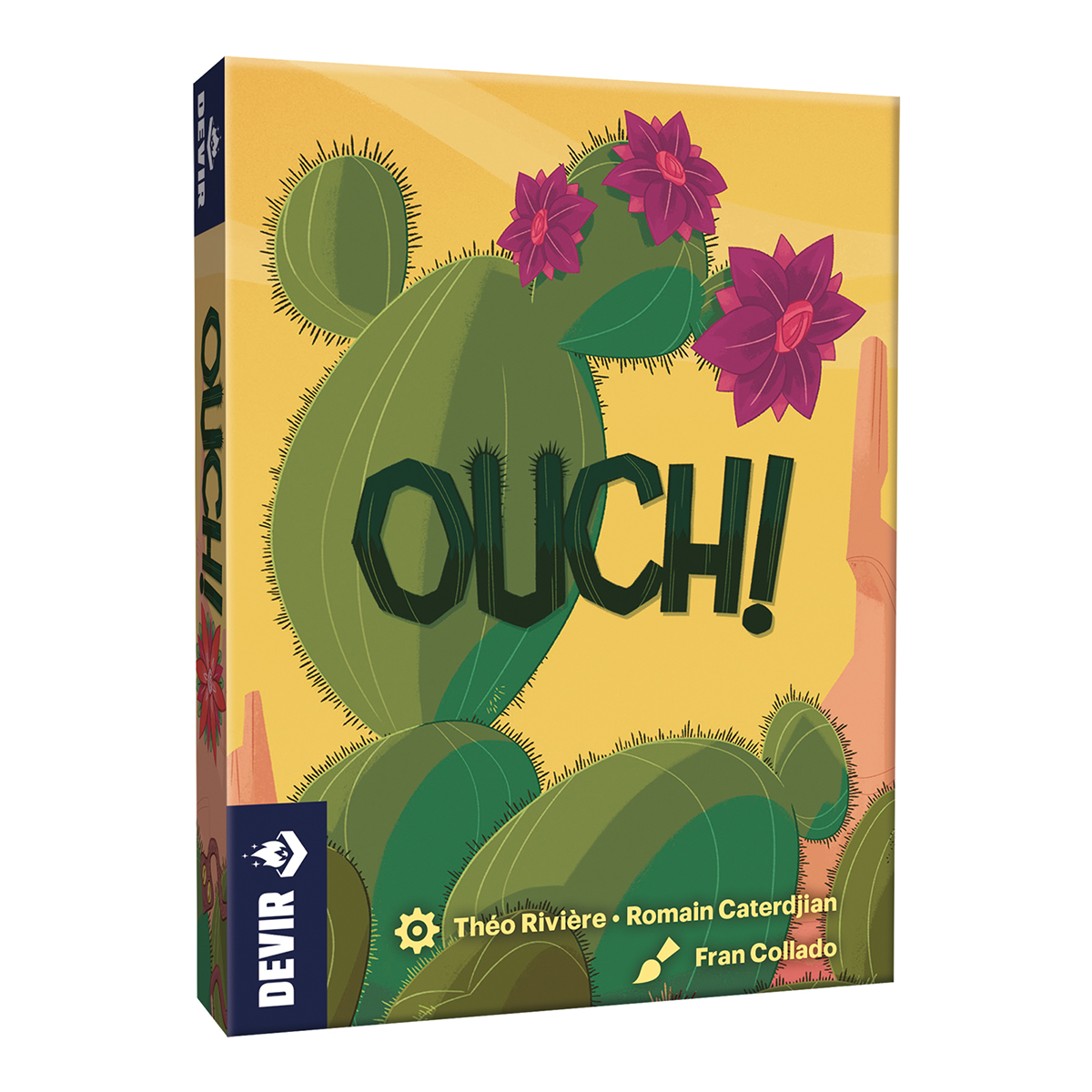 Ouch! is a card game created by Romain Caterdjian and Théo Rivière and illustrated by Fran Collado. Recommended for ages five and up, it can be played by 2 to 5 players in games lasting about ten minutes. Players will compete to obtain the largest and most varied number of cactus flowers while avoiding the sharp spikes.

Learning the rules will take you no more than 10 minutes. To start playing, shuffle the 44 cactus cards and place them in the center of the table. Draw six cards from the deck and place them in a row showing their backs. These are the cacti you have at your disposal as you explore the desert. The more flowers the back shows, the greater the reward, but also the more dangerous it is to get it!

The youngest player is the first to try to get the precious desert flowers. Choose any of the six cards in the center of the table, taking it from one of its four sides. Decide whether to flip it over to the left, right, top or bottom side. If the side you choose shows a cactus.... Ouch! You got a puncture and couldn't pick up the flower; leave the card in the box. Otherwise, keep the card in your playing area. Then fill in the row of cards so that there are always six cards available.

The game is played in clockwise turns, with each player repeating this same sequence. Desert animals are also hidden among the cactus cards, which add special effects to the game. If you reveal a card on which there is an animal and you have not been pricked by the cactus spikes, you can benefit from its powers! On the one hand, there are the hissing vipers: once obtained, if the next player is pricked by a thorn, he must give you the card instead of returning it to the box. On the other hand, the fennec, the desert fox, allows you, if you wish, to play a second turn in a row. However, if you get a puncture during this additional turn, you will also lose the fennec card!

One last detail that you should keep in mind while exploring the desert is that not all flowers are the same... If you get pricked by a cactus card that has a red flower, in addition to discarding it you will have to lose a second card from your reserve of your choice. However, there is no risk without reward: at the end of the game, the player who has more red flowers wins 5 additional points.

When a player has obtained eight cards or when the central deck is exhausted, the game is over. To determine the winner, you have to add one point for each flower obtained, the bonus of five points for the player or players with the most red flowers and a final wild bouquet bonus: four additional points for each set of four different colored flowers you have. Whoever scores the most points has won!

Ouch! It's designed to play with the little ones at home. If so, you can adjust the difficulty and dispense with some of the rules, such as the desert animals or the red flowers penalty. Go on an expedition and come back with the most colorful bouquets!